I was fortunate to have been invited along with nine other "social media" people to tour the Smithsonian Air & Space Museum's Stephen F. Udvar-Hazy Center adjacent to Dulles International Airport in Chantilly, Virginia on Saturday, January 24, 2015. They were having an open house later in the day (see #OpenUHC2015 on Twitter).

Our group enjoyed interacting with seven speakers as we toured the newly-opened Restoration Hangar and primary exhibit area, but one of the highlights, and certainly the most anticipated part of the day, was visiting the original USS Enterprise NCC-1701 model ("Big Enterprise") that was used in filming the original Star Trek TV series (TOS) and talking with Margaret Weitekamp, Space History Curator (@mgtwsapce) and Malcolm Collum, Chief Conservator about the restoration of this iconic artifact.

Here are the pictures that I took of Scotty's pride and joy.

Those familiar with the history of this model know that several attempts had been made to "restore" her in the past, efforts that might charitably be called "half-assed". Museum conservation and restoration has advanced significantly in the intervening years, particularly for aerospace artifacts, and the present effort is likely to produce an exhibit worthy of its history and impact. I am truly excited to see what they do this time and look forward to seeing "Big E" when it reaches its final destination in a place of honor at the main Air & Space Museum in downtown Washington D.C. 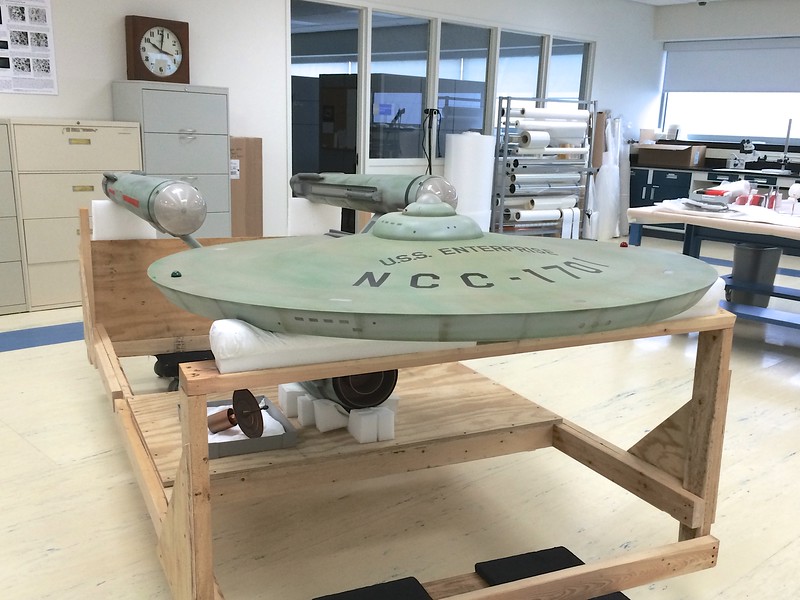